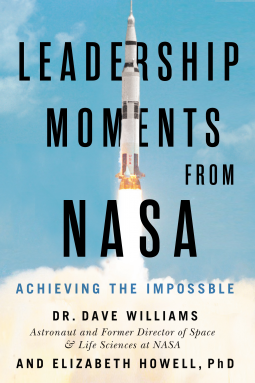 Astronaut and former director of space and life sciences at NASA

It is a humbling feeling to meet someone who has achieved a staggering number of career goals yet remains modest about his success. Such is the case when you meet 67-year-old Oakville resident Dr. Dave Williams.

The husband and father of two is an astronaut, an aquanaut, an emergency room surgeon, a scientist and a commercial pilot. He has flown two missions on NASA’s space shuttle and holds the Canadian spacewalking record. A recipient of the Order of Ontario and Order of Canada, the Doctor of Medicine and Master of Surgery has six honorary doctorates in laws and science and was crew commander on NASA’s NEEMO undersea research missions in 2004 and 2006. The bestselling author has just released his latest book, Leadership Moments from NASA, co-written by Elizabeth Howell which delves into the organization’s culture, leadership styles and insights of NASA senior executives spanning five decades of human spaceflight.

“Both Elizabeth and I were very excited to write this book, as great leadership can change the world and bad leadership can have significant consequences,” explains Williams. “From my perspective, learning about leadership is a lifetime journey often accompanied by lessons learned in the school of hard knocks. I think the book is relevant for those starting their leadership careers as well as seasoned veterans who are curious about how leaders at NASA were able to accomplish what they did.” 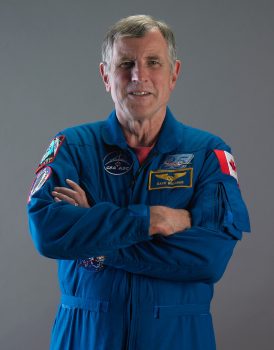 Williams’ own journey to become one of Canada’s first astronauts wasn’t without its challenges. Born in Saskatoon, Williams moved with his family to Montreal when he was just over a year old. It was here that he pinpoints the moment he wanted to become an astronaut. In his bestselling memoir, Defying Limits: Lessons from the Edge of the Universe, Williams describes watching the CBS news coverage of Alan Shepard’s launch from Cape Canaveral, Florida on the family’s black-and-white TV. It was May 5, 1961, and the 7-year-old was awestruck.

In his book he writes, “It’s amazing, looking back at this event now, to think that a fifteen-minute suborbital flight inspired me to pursue a career that seemed almost impossible. But it was real. Perhaps I could do this. Maybe I could be an astronaut and fly to outer space.” Although Canada had no space program at the time, he would not be deterred from his dream and attributes his insatiable curiosity, nurtured by parents who encouraged him to try, fail, learn and try again, for propelling him toward that seemingly insurmountable dream.

His father, a bank manager, was a mountain climber and an explorer at heart according to Williams, and his mother was an operating room nurse. He credits both of them for developing his passion for exploration. When 12-year-old Williams developed a fascination with the TV program, The Undersea World of Jacques Cousteau, his father helped fuel his desire to learn scuba diving by enrolling him in lessons; Williams became a certified diver by the age of 13 (no small feat in 1960s Montreal).

Upon high school graduation, he envisioned a career in life sciences or medicine, describing his academic performance as “slightly above average in high school.” His undergraduate studies in physiology at McGill University naturally segued into a desire to pursue medicine. His first application to medical school, however, was rejected. Williams doubled down on his efforts and was accepted when he re-applied, graduating from McGill with the Wood Gold Medal in 1983, awarded for the most outstanding clinical performance achieved by a student.

He was soon exceling as an emergency physician and, by 1992, was the director of the emergency department at Sunnybrook Hospital. That same year he learned the Canadian Space Agency was recruiting astronauts. Williams, still clinging to his boyhood dream, applied immediately. Among the 5,300 applicants, he was one of four chosen candidates along with Julia Payette, Chris Hadfield and Rob Stewart, to become an astronaut.

Today he describes himself as a visionary who is passionate, resilient and willing to work hard. “I’m willing to manage risks, to take on challenges” he says. “I believe you should push yourself to the edge of your comfort zone.” Even still, he’s also had to overcome tough hurdles. Among them, he admits, was that inner voice that focuses on the negative. “In my twenties, that was more of an issue,” he says. “I wish I could have told my younger self not to worry, that it will all come out right in the end.”

At the age of 50, before his second space flight, Williams was diagnosed with cancer. At that time, Williams drew inspiration from the book Man’s Search for Meaning, written by Holocaust survivor and renowned psychiatrist Victor Fankl.  It taught him that “Life can take everything away from you,” says Williams. “Except the ability to choose how you respond to the situation you are in.”

Williams also credits his experience working at NASA for managing challenges with toughness and competence, as well as a dose of humility: “NASA was an incredible organization to work for because the individuals there are almost uniformly the best of the best. There is a sense of legacy for the amazing accomplishments of the organization but also a pervasive sense of the importance of being tough and competent to deal with the challenges of sending humans into space,” he explains, adding that it had a culture that also encouraged speaking up, disagreement and dialogue to make better decisions.

His new book on leadership in NASA, he says, is particularly relevant to the times we are. “Leadership today is no longer about the single heroic leader at the top that directs a team to success. It’s about teams of peak performing individuals embracing a vision established by the senior leader in the organization. The leaders influence others not by virtue of their positional authority but rather by personal influence based on their technical and behavioral competencies and repertoire of leadership skills.”

He shares a perspective few of us have experienced – working in an organization that sends human beings to space. Even rarer, still, is the vision of our earth he’s witnessed from outer space.

“The image of our beautiful planet cast against the black, infinite void of space is incredible,” he says, “It is the cradle of life, of humanity, there are no borders between countries that can be seen from space and it is clear that we’re all in this together.”