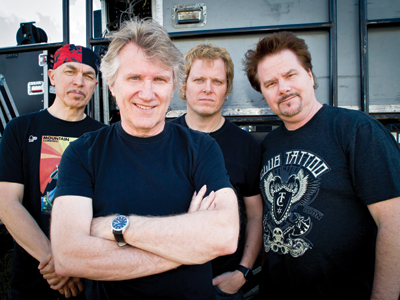 Bif Naked is an interesting woman. While she's likely best known for her music career, she's also had a successful stint as an actor, a spoken word poet and just released her memoirs I, Bificus. She's also a cancer survivor. If you're a fan of her music, or just find her whole life story fascinating, you might want to check her out when she comes to The Studio at Hamilton Place on November 12 as part of her Songs and Stories Tour. The multi-talented artist will perform a selection of her songs acoustically (hopefully including hits such as “Tango Shoes” and “Spaceman”) along with readings from her new book as well. She will be joined by special guest Jordan Alexander at the concert. Tickets cost $25 and can be purchased through Ticketmaster.

Also happening that evening is a concert by the Hamilton Philharmonic Orchestra at Hamilton Place. The concert, called A Night of Swing, will feature the orchestra playing hits from the 1930s and “˜40s including tunes such as “Blue Moon” and “I've Got You Under My Skin.” Tickets cost $28.25 to $75.70.

Canada's preeminent Inuk singer Susan Aglukark makes a stop at the Oakville Centre for a concert on December 15 and the performance will have a holiday vibe to it. Aglukark, a multiple Juno Award-winner, will present selections from her 2013 album Dreaming of Home at the concert. The performance will feature a number of seasonal hits sung both in English as well as Aglukark's native Inuktitut. For example, she will present her take on “Silent Night” as well as “Old Toy Trains,” which is one of her favourites. Tickets cost $50. To purchase, call the box office at 905.815.2021.

Fans of The Beatles and The Rolling Stones won't want to miss Classic Albums Live when the touring musicians visit the Oakville Centre on December 14 for a concert featuring the biggest hits of both bands. Classic Albums Live presents concerts where live musicians recreate the music of famous albums and they certainly will have more than their fair share of great songs to select from with those legendary acts. Tickets cost $65.

The Leahys are one of Canada's most famous musical families and three generations of them are coming to the Burlington Performing Arts Centre for a concert on December 11. The Next Generation Leahy band features dad Doug and mother Jennifer along with children Adele, Gregory, Angus, Cecilia, Joseph and Evelyn, who range in age from five to 13. They will dance, sing and play a variety of instruments including the fiddle and piano at the concert. Tickets cost $25 to $58 and can be purchased by calling the box office at 905.681.6000.

Steve Page is one of Canada's most popular and enduring singers and he's coming to the Milton Centre for the Arts on November 19 for a concert. The singer, who rose to prominence with the Barenaked Ladies, has been on his own for a number of years now. He released his latest solo album, Heal Thyself Pt. 1: Instinct, earlier this year and it's been very well received. Tickets cost $33 to $35 and can be purchased by calling the box office at 905.878.6000.

Extremely popular YouTuber and Brampton native Jus Reign will have a chance to delight the hometown crowd with his Jus Reign: A Very Punjabi Christmas! show on December 17 at the Rose Theatre in Brampton. The show's billed as a night of comedy, music, dance and romance and will be a new way to experience Christmas. Tickets cost $35 to $100 and can be purchased by calling the box office at 905.306.6000.

Rik Emmett, who spent many years as frontman of the thunderous Canadian rock trio Triumph, is back with a new band and new album and will be showing off both with a concert on November 26 at the Living Arts Centre. Emmett has embraced his rock roots on the RES 9 album that he recorded with his band RESolution9. Former Triumph bandmates Gil Moore and Mike Levine join him on the album as does Rush guitarist Alex Lifeson. Tickets cost $40 to $60 and can be purchased by calling the box office at 905.306.6000.